Hello! Get FREE shipping on orders over $75! 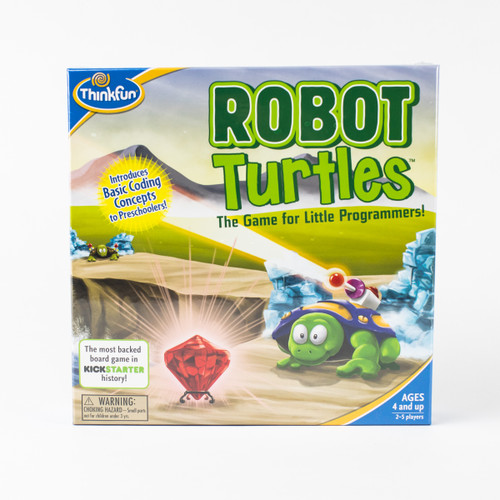 A fun way to learn the fundamentals of coding!

Robot Turtles was designed by programming expert Dan Shapiro and was the most-backed board game in Kickstarter history when first released.

Robot Turtles is a board game for kids inspired by the Logo programming language. It provides crucial brain development and computer programming skills to children as young as 4 years old in the context of family fun.

Players dictate the movements of their Robot Turtle tokens on a game board by playing Code Cards: Forward, Left and Right. When a player's Robot Turtle reaches a jewel they win! If they make a mistake, they can use a Bug Card to undo a move.

The game has many levels so, as the players advance, they will encounter obstacles like Ice Walls and use more complex Code Cards (like lasers to melt the walls). Play continues until all players collect a jewel, so everyone wins. Beginner to Advanced levels will make it your kid's favorite for many years.

In the box: a large Game Board, 40 Tiles, 4 Robot Turtle Tiles, 4 Jewel Tiles, 4 Code Card Decks (45 cards in each deck) and instructions.

2-5 players can play at once and everyone who gets the Robot Jewel wins.

Recommended for ages 4 and up.